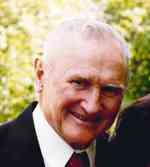 William H. "Bud" Welch, 92, of Aledo, IL, died Saturday, September 21, 2013 at Genesis Senior Living Center in Aledo. Graveside and Military Services are 10:30 a.m., Thursday, September 26, 2013 at the New Boston Cemetery. Visitation is 9-10 a.m. prior to services at Fippinger Funeral Home in Aledo. Memorials may be made to the Mercer County VFW Post 1571 of which he was a member. Online condolences can be made at www.fippingerfuneralhome.com.

He proudly served his country in the U.S. Navy during World War II for 6 years and was called back during the Korean War for 18 months. He survived two ships being torpedoed within 24 hours. He was injured, but his records were lost so he received his purple heart many years later.

Bud farmed briefly then managed the Standard Oil Station in Viola before managing the Standard Oil Training Station in Sandwich, IL. He moved to California in 1960, then to Colorado in 1971 to work for the National Park Service, retiring in 1982. He was maintenance manager for 11 Mile Ranch Development after retirement for over 20 years in Lake George, CO, until 2008.

Bud was a dedicated NASCAR fan and enjoyed restoring classic cars, dancing with Ruth and sightseeing in Colorado.

His parents; wife: Ruth; one son: Larry; one sister: Marjorie preceded him in death.


Purple Heart Award from the U.S. Military
US Navy
VFW
The insignias listed here may be subject to copyright and / or trademarked. Those copyrights and trademarks are owned by the respective organizations.

To send flowers to the family in memory of William Welch, please visit our flower store.