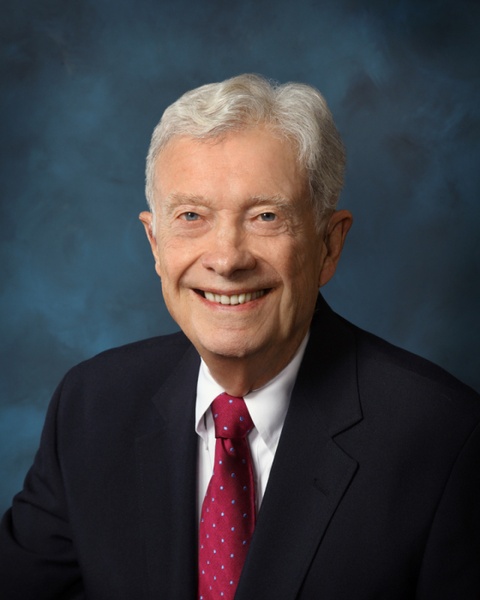 William Charles Ives, age 87, a native of Aledo, IL, formerly of Hinsdale, IL, and residing in Chapel Hill, NC, died peacefully on May 30, 2020. He left with great reluctance following Dylan Thomas’ advice, “Do not go gentle into that good night.” With him at the end were Virginia, his beloved wife and soulmate, and family.

While at Knox and with his lifelong friend, the late Craig E. Lovitt of Galesburg, he took a then unprecedented five-week trip to Russia in 1954, a journey that received wide national media coverage and about which they both wrote and spoke extensively.

Bill served in the U. S. Army from 1955 to 1957. Although trained as an infantry officer, he joined the US Army's Counter Intelligence Corps as a Special Agent and a Field Office Commander in Giessen, Germany. He was always proud of his military service and the many lessons he learned from it.

Bill practiced law for almost 60 years, with Keck, Mahin and Cate in Chicago (1960 - 1996), where he rose to become Chairman of its Management Committee and then as a partner with Michael, Best and Friedrich (1997 - 2003.) He was in solo practice in Chapel Hill from 2004 - 2019. Bill was admitted to practice before the U.S. Supreme Court and other federal courts and was a member of The Law Club. He gave numerous speeches on legal subjects.

Although deeply involved in Republican politics, he never sought public office. He was a member of the Illinois Republican State Central Committee for 12 years and was a Vice Chairman. Bill was elected to the Illinois College of Presidential Electors in 1968, 1972 and 1976 and twice served as its Chairman. He was a delegate to and Credentials Committee Member of the 1976 GOP National Convention.

Bill’s civic involvement included the Executive Committee of the 1992 Chicago World's Fair, long time board member and President of the International Churchill Center, Board of Governors of the Association of Churchill Fellows at the National Churchill Museum and member of the Illinois State Historical Society’s Advisory Board.

His hobbies were collecting, traveling and golf. Bill and Virginia visited more than 200 countries. He was an avid golfer and won two Oakview Country Club Championships.

An avid sports fan, Bill’s sun rose and set on the fortunes of the Chicago White Sox. He rooted strenuously for the Chicago Bears and Bulls. Illinois and Duke were his favorite college basketball teams. Throughout his life, he remained a stalwart booster of Aledo and its teams even though their superb mascot, "Green Dragon,” had been dropped years before.

Bill is survived by his wife, Virginia Ruth Lowry Ives of Chapel Hill, with whom he shared 40 happy and eventful years and his sister-in-law, Lois Lumbach Ives. He was immensely proud of his three children by his first wife, Jane Peterson Schroeder, David William (Jeanne), Carol Elaine Ives Davis and Dr. Daniel Winston (Joy); and his eight grandchildren, Matthew Ives, Andrew Davis, William Ives, Alison Davis, Jeremy Ives, Daniel Ives, Jr., Madeleine Ives and Thomas Ives. They all, except Matthew, survive him as well as six “Grand-dogs”, Jade, Winnie, Kane, Itsy, Bubbles and Bella. He was preceded in death by his parents, brother Robert, nephew Rob Ives and grandson Matthew. Services will be in his hometown of Aledo, Il, on Saturday, June 6, 2020, at 11 AM at Fippinger Funeral Home. Burial will be in the Aledo Cemetery with Military Honors. A Memorial Service will be held in Chapel Hill at a later date. In lieu of flowers, please donate to a Food Bank of your choice.

To send flowers to the family in memory of William Ives, please visit our flower store.
Open