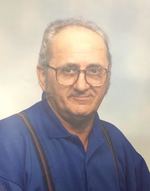 William H. "Bill" Hill, 74 of Savannah, MO, formerly of Moline, IL, died Sunday, January 10, 2016 at Shady Lawn Nursing & Rehab in Savannah, MO. Cremation has been accorded. Graveside services will be 11 a.m. Saturday, January 16, 2016 at the Aledo Cemetery where graveside military services will be conducted. A memorial service will be 1:30 p.m. Saturday, January 16, 2016 at Temple Missionary Baptist Church in Moline. Memorials may be left to the family. Fippinger Funeral Home in Aledo is in charge of arrangments and online condolences can be made at www.fippingerfuneralhome.com.

Bill was employed by the Rock Island Postal Service. He was always laughing and telling jokes. He was a great dad who loved his family unconditionally. He spent time with his friends at InTouch. He enjoyed food with friends and if you sat next to him, he would be your friend by the end of the meal. His CB radio handle was "Wild Bill" and Wild Bill will be missed.

He was preceded in death by his parents, wife, four brothers Don, Norman, twin brother, Willis and Doug Hill and one sister, Norma Nordman.

To send flowers to the family in memory of William Hill, please visit our flower store.