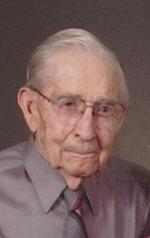 Willard E. "Bill" Williams age 92 of Aledo, Illinois, died Tuesday June 23, 2015 at the Genesis Senior Living in Aledo. Services are 10:30 AM Friday June 26, 2015 at the Fippinger Funeral Home in Aledo. Burial is in the Aledo Cemetery. Visitation is 4-7 p.m. Thursday at Fippinger's where memorials may be left to Corns Cemetery or the First Baptist Church in Aledo. Online condolences can be made at www.fippingerfuneralhome.com.

He farmed in Perryton Township all of his life retiring in 1980.

Bill was a member of Enon Baptist Church on Ridge Road in Perryton Township for many years. He was currently a member of the First Baptist Church in Aledo where he served in several different capacities. He previously served as a Black Oak School Board member and an alderman for the City of Aledo. He was a former member of the Mercer County Board of Supervisors.

His parents; eight sisters and three brothers preceded him in death.

To send flowers to the family in memory of Willard Williams, please visit our flower store.