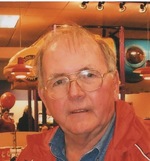 Wayne E. Johnson, 69, of Alpha, Illinois died Friday, May 2, 2014 at home. Services are 1:00 p.m. Wednesday, May 7, 2014 at Peterson-Wallin-Knox Funeral Home in Woodhull. Burial is in the Woodhull Cemetery. Visitation is 4-7 p.m. Tuesday at the funeral home where memorials may be made to the American Heart Association. Online condolences can be made at www.petersonwallinknox.com.

He coached baseball for many years and enjoyed fishing in Canada, golfing, mushroom hunting and his dogs. He was an avid Cardinals and 49ers fan and enjoyed going to the casinos. He loved his family, especially his grandchildren and was a kind and generous man.

He was preceded in death by his parents and one sister, Janice Litton.

To send flowers to the family in memory of Wayne Johnson, please visit our flower store.