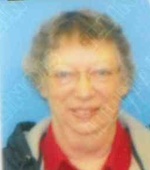 Verna A. LeeVey, 73, of Aledo, Illinois, died Saturday, February 14, 2015 at Unity Point Health in Rock Island. Graveside services are 11:00 AM Tuesday, February 17, 2015 at Farlow Grove Cemetery in Matherville. Visitation is 9:30 -10:30 a.m. Tuesday at Fippinger Funeral Home in Aledo where memorials may be left to the American Cancer Society. Online condolences can be made at www.fippingerfuneralhome.com.

She was born April 12, 1941 in Crossroads, Missouri to Bernie and Goldie Lawson Hurst. Verna graduated from Bradleyville High School in 1959. She married Leslie LeeVey in 1979. He preceded her in death in 1990.

Verna was employed at Trinity West in Rock Island as an outpatient registration clerk for 31 years.

Her parents, husband and one brother, Lenard Hurst preceded her in death.

To send flowers to the family in memory of Verna LeeVey, please visit our flower store.