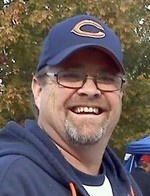 Troy A. Ward, 53, of Indianapolis, IN, formerly of Alpha, IL died Monday, April 18, 2016 at home. Services are 10:30 a.m. Monday, April 25, 2016 at Peterson-Wallin-Knox Funeral Home in Alpha. Burial is in the Alpha Cemetery where graveside military services will be conducted. Visitation is 4-7 p.m. Sunday at Peterson-Wallin-Knox Funeral Home in Alpha, where a rosary will be recited at 7 p.m. Memorials may be left to DAV or St. Jude Children's Research Hospital and online condolences can be made at www.petersonwallinknox.com.

He was born August 8, 1962 in Moline, IL to Laurence and Roberta Farley Ward. He graduated from AlWood High School in 1980. Troy married Marilyn D. Brafford, October 17, 1992 in his parents' home in Alpha, IL.
Troy served in the U.S. Army, serving for six years.

He was employed as a dock worker at YRC Freight in Indianapolis for 29 years.

Troy was a member of the American Legion.

He enjoyed all genres of music and golfing. He was an avid Chicago Bears, Chicago Cubs and Fighting Illini fan. Troy was a pit master confirmed by many people, and especially enjoyed his grandchildren.

He was preceded in death by his grandparents.


American Legion
Army
Army
Good Conduct Medal
The insignias listed here may be subject to copyright and / or trademarked. Those copyrights and trademarks are owned by the respective organizations.

To send flowers to the family in memory of Troy Ward, please visit our flower store.