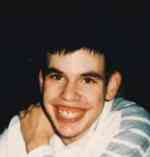 Torrey John Petrovich, 37, of Galesburg, IL, formerly of Alpha, IL, died Tuesday, May 21, 2013 at Cottage Hospital in Galesburg.. Cremation has been accorded. A Mass of Christian Burial will be 11 a.m., Saturday, May 25, 2013 at St. John's Catholic Church in Woodhull. Private burial will be in the Alpha Cemetery at a later date. Memorials may be left to St. Mary's Square, 239 South Cherry, Street, Galesburg, IL 61401. Peterson-Wallin-Knox Funeral Home in Alpha is in charge of arrangements and online condolences can be made at www.petersonwallinknox.com.

He was born April 19, 1976 in Galesburg, IL to Michael John and Georgia Jane Faber Petrovich. He graduated from Blackhawk Area Special Education Schools in 1997. He became a resident of St. Mary's Living Center in Galesburg that same year.

He enjoyed his regular home visits, especially his mother's cooking and spending days outside with his TV Guide.

Survivors include his parents: Michael and Jane Petrovich of Alpha, IL; one sister: Michele Petrovich of Rock Island, IL; one brother: Justin (Amy) Petrovich of Carlinville, IL; one nephew: Jacob; and one niece: Anna.

He was preceded in death by his paternal and maternal grandparents and two uncles.

To send flowers to the family in memory of Torrey Petrovich, please visit our flower store.