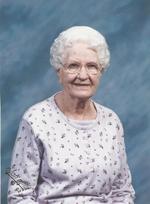 Susie E. "Libby" Tomlinson, 98, of New Windsor, IL, formerly of Swedona, IL, died Saturday, December 8, 2012 at Hope Creek Care in East Moline. Services are 10 a.m., Wednesday, December 19, 2012 at Peterson-Wallin-Knox Funeral Home in Alpha. Burial is in the Swedona Lutheran Cemetery. Visitation is 4-7 p.m. Tuesday at Peterson-Wallin-Knox Funeral Home where memorials may be left to the Swedona Lutheran Church or the Alzheimer's Association. Online condolences can be made at www.petersonwallinknoxfuneralhome.com.

She was born August 25, 1914 in Alexis, IL to Leslie and Katherine Laughead Downer. She attended the local schools and married Robert Tomlinson October 18, 1933 in Galesburg, IL. He died November 29, 1997.

Susie was a homemaker and assisted her husband in the operation of their farm.

She was a member of Swedona Lutheran Church and Mercer County Home Extension. She enjoyed bowling at the Alpha and Orion Lanes, playing cards, cooking and wintering in Texas.

She was preceded in death by her parents; husband; one son-in-law: Charles; one granddaughter: Staci; four sisters; and two brothers.


Lutheran Church
The insignias listed here may be subject to copyright and / or trademarked. Those copyrights and trademarks are owned by the respective organizations.

To send flowers to the family in memory of Susie Tomlinson, please visit our flower store.