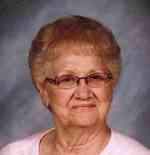 Shirley J. Lundeen Bivens, 79, of Aledo, Illinois, died Monday, December 30, 2013 at Heartland Health Care Center in Moline. Services are 10:30 a.m., Saturday, January 4, 2014 at Messiah Lutheran Church Aledo. Burial is in the Aledo Cemetery. Visitation is 4-8 p.m. Friday at Fippinger Funeral Home in Aledo. Memorials may be left to Messiah Lutheran Church and online condolences can be made at www.fippingerfuneralhome.com.

She was a member of Messiah Lutheran Church, Mercer County VFW Post 1571 Auxiliary and the Wednesday Evening Ladies Bowling League. Shirley was the secretary/treasurer for the Tuesday Night Men's and Jolly Boys Bowling Leagues.

Her parents; husbands; one son: Carl Jr.; one daughter: Kim; one grandson-in-law: Mike McIntire; three sisters and three brothers preceded her in death.


Evangelical Lutheran Church in America
VFW Auxiliary
The insignias listed here may be subject to copyright and / or trademarked. Those copyrights and trademarks are owned by the respective organizations.

To send flowers to the family in memory of Shirley Bivens, please visit our flower store.