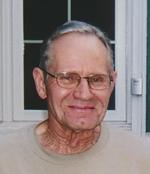 Sam Thompson, 80, of New Windsor, IL died Sunday, January 31, 2016 died peacefully in his home. Services are 10:30 a.m. Thursday, February 4, 2016 at the Calvary Lutheran Church in New Windsor. Burial is in Calvary Lutheran Cemetery. Visitation is 4-7 p.m. Wednesday at Peterson-Wallin-Knox Funeral Home in Alpha where a memorial fund will be established. Online condolences can be made at www.petersonwallinknox.com.

Sam was employed as a material handler at John Deere Harvester in Moline, retiring in 1989. He later worked at Country Corners in Alpha and was a member of Calvary Lutheran Church in New Windsor where he was active in Vacation Bible School.

He enjoyed fishing, making birdhouses, airplanes and lawn ornaments. He especially enjoyed being with his family.

Sam was preceded in death by his parents, wife, Peggy, one son, Daniel, one brother, Hayes and one sister, Patricia.


Evangelical Lutheran Church in America
John Deere
The insignias listed here may be subject to copyright and / or trademarked. Those copyrights and trademarks are owned by the respective organizations.

To send flowers to the family in memory of Sam Thompson, please visit our flower store.