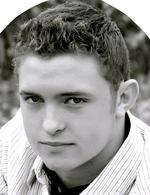 Ryan D. Miley, 22, of Woodhull, Illinois, died Saturday, November 16, 2013 as a result of a one vehicle accident near Andover, Illinois. Services are 7:00 p.m., Tuesday, November 19, 2013 at Peterson-Wallin-Knox Funeral Home in Woodhull. Private burial will be at a later date. Friends may greet the family from 5-7 p.m., prior to services at the funeral home. In lieu of flowers, memorials may be left to an education fund for Ryan's son, Avrin. Online condolences can be made at www.petersonwallinknox.com.

He was born February 27, 1991 in Birkenfeld, Germany to Jason and Lashaun Norton Miley. He attended the AlWood schools and graduated from Olathe South High School in Olathe, Kansas.

He was employed as a machinist at General Grind & Machine in Aledo.

He enjoyed sports, music and being with his son, Avrin.

He was preceded in death by his grandmother, Roberta Lynn Dorn and step grandfather, Gary Kness.

To send flowers to the family in memory of Ryan Miley, please visit our flower store.