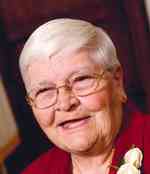 Ruth Evelyn Bell, 91, of Aledo, Illinois, formerly of Illinois City, Illinois, died Saturday, January 18, 2014 at Genesis Senior Living Center in Aledo. Services are 11:00 a.m., Thursday, January 23, 2014 at Fippinger Funeral Home in Aledo. Burial is in the National Cemetery, Rock Island Arsenal. Visitation is one hour prior to services Thursday at Fippinger's where memorials may be left to Genesis Senior Living Center's Activity Fund. Online condolences can be made at www.fippingerfuneralhome.com.

She was a homemaker and after Albert's death she became a cook at Maid Rite in Muscatine, IA. She was of the Baptist faith and enjoyed flowers, gardening and country and western music.

Her parents, husband, one brother preceded her in death.

To send flowers to the family in memory of Ruth Bell, please visit our flower store.