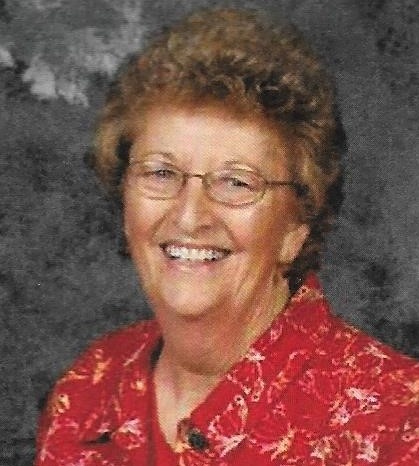 Rosemary Schone, 81 of Viola, IL died Friday, May 19, 2017 at home. Services are 10:30 AM May 23, 2017 at Calvary Lutheran Church in New Windsor, IL. Burial is in the Viola Cemetery. Visitation is from 4-7 PM Monday at the church where memorials may be left to the Calvary Lutheran Church or the Viola Fire Department. Peterson Wallin Knox Funeral Home in Alpha is in charge of arrangements and online condolences can be made at www.petersonwallinknox.com.

She was born July 18, 1935 in Virginia, Illinois to Charles and Lela Rexroat Quigg. Rosemary graduated from Virginia High School. She was united in marriage to John “Jack” W. Schone in the Methodist Church in Virginia, IL, on August 8, 1954. He died in 1999.

Rosemary was employed at the University of Illinois Extension Office in Aledo where she was involved in the Family Nutrition Program, retiring in 2009. She worked at the former Viola Flower Shop and various fabric stores throughout the area.

Her memberships included the Viola Book Club and Calvary Lutheran Church in New Windsor where she was a member of the WELCA and the Fern Mar Society. She was also a 4H leader for many years in Cass County.

She enjoyed sewing, flower gardening and especially being with her family.

Her parents, husband, 1 sister, Helen and 3 brothers, Bill, Baird and Albert preceded her in death.

Click to download / open
To send flowers to the family in memory of Rosemary Schone, please visit our flower store.