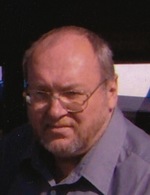 Roger D. David, 62, of Bettendorf, Iowa died Thursday, August 21, 2014 at Genesis East in Davenport with his family by his side. Graveside services are 10:30 a.m. Saturday, August 30, 2014 at the Aledo Cemetery. Visitation is 9-10 a.m. Saturday at Fippinger Funeral Home in Aledo. A memorial fund will be established and online condolences can be made at www.fippingerfuneralhome.com.

He was born July 22, 1952 in Rock Island, Illinois to Sonny and Marye Beck David. He attended the Aledo schools, was employed by A1 Rental in Moline and as a machinist in Oklahoma City.

He enjoyed reading books, watching old movies and being with his family.

His parents and three brothers, Dick, Jerry and Robin preceded him in death.

To send flowers to the family in memory of Roger David, please visit our flower store.