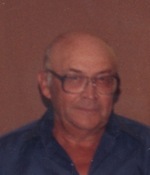 Robert W. Peterson, 91, of New Windsor, Illinois died Wednesday, March 19, 2014 at Unity-Point Trinity in Rock Island, IL. Services are 10:00 a.m. Saturday, March 22, 2014 at Peterson-Wallin-Knox Funeral Home in Alpha. Burial is in the Evergreen Memorial Gardens in Kewanee where graveside military rites will be conducted. Visitation will be one hour prior to services at the funeral home where memorials may be made to Messiah Lutheran Church, Henderson Grove, Galesburg, IL. Online condolences can be made at www.petersonwallinknox.com.

Robert farmed in the New Windsor area and also worked at Flick's Home Center in Moline, IL. He was a member of Messiah Lutheran Church in Henderson Grove, IL and a 50 year member of the American Legion Post 484, where he served on the Drill Team.

Robert is survived by many nieces and nephews and their families. He was preceded in death by his wife and siblings, Raymond Peterson, Mildred Fostrom, Pauline Pheiffer, Wilma Oglebay, Alice Flick and Mary Lou Peterson.

To send flowers to the family in memory of Robert Peterson, please visit our flower store.