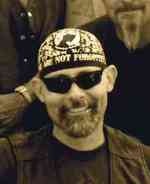 Robert A. "Mazz" Mazzocco, 45, of Aledo, IL, died Thursday, September 19, 2013 at his home. Services are 10:30 a.m., Tuesday, September 24, 2013 at the Fippinger Funeral Home in Aledo. Burial and Military Rites will be at the National Cemetery, Rock Island Arsenal. Visitation is from 4-7 p.m., Monday at Fippinger's where memorials may be left to the MDM Trust Fund, 357 State Highway 135, Alexis, IL, for his children's education. Online condolences can be made at www.fippingerfuneralhome.com.

Rob was born March 18, 1968 in Uniontown, PA to John T. and Mary A. Polvinale Mazzocco. He graduated from Uniontown Area High School. After graduating, he enlisted in the U.S. Marine Corp. Rob was deployed with the 1st Marine Division to the Persian Gulf in August 1990. He was a member of Task Force Shepard who breached the Iraqi Southern Mine Fields and participated in the armor battle in the burning oil fields of southern Kuwait. He also fought in the capture of Kuwait International Airport and received the USMC Combat Action Award.

On January 18, 2001, he married Melinda L. Gruber in Nassau, Bahamas. Rob was employed with the Department of the Army at the Rock Island Arsenal.

He was a member of the Aledo United Methodist Church and enjoyed target shooting, reloading and riding his motorcycle.

Survivors include his wife: Melinda and his two children: Mallory and Dillon, all of Aledo; his mother: Mary Mazzocco; one sister: Andrea (Andrew) Levy, all of Mechanicsburg, PA; and 5 nieces and nephews.


Good Conduct Medal
Navy Achievement Medal
United Methodist Church
U S Marine Corps
US Marine Corps Rifle Marksmanship Badge
The insignias listed here may be subject to copyright and / or trademarked. Those copyrights and trademarks are owned by the respective organizations.

To send flowers to the family in memory of Robert Mazzocco, please visit our flower store.