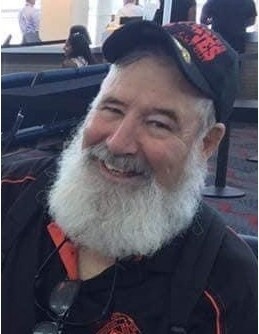 Robert Paul Boyce, 78, died Friday, September 10, 2021 at the Paula J. Baber Hospice House in Fort Dodge.  Funeral services will be held at 2 p.m. on Thursday, September 16, 2021 at Lampe & Powers Funeral Home in Lake City.  Burial will be held at the Peniel Cemetery in rural Joy, Illinois. In lieu of flowers, memorials may be left for Grace Fellowship Church in Rockwell City.

Robert Paul Boyce, Sr., was born on November 21, 1942, in Joy, Illinois to Wallace and Luella (Locey) Boyce and was raised by Luella and his step-father Emery Kenney. He served in the United States Marine Corps from 1960-1966.  On September 10, 1963, Robert Paul married Judith Schoenbaum in Long Beach, CA and the couple celebrated 52 years of marriage before Judy’s death in 2014.  On January 27, 2018, Robert Paul married Edwina “Eddie” Coffey in Indianola.  He worked as a key system installer for GTE, Verizon, and Iowa Telecom and was a member of the American Legion, Christian Motorcycle Association and was a founding member of Grace Fellowship Church in Rockwell City.  Robert Paul was a past Boy Scout leader; he enjoyed traveling, motorcycles, he loved playing Santa Claus, and ministering at nursing homes.

To send flowers to the family in memory of Robert Boyce, Sr., please visit our flower store.