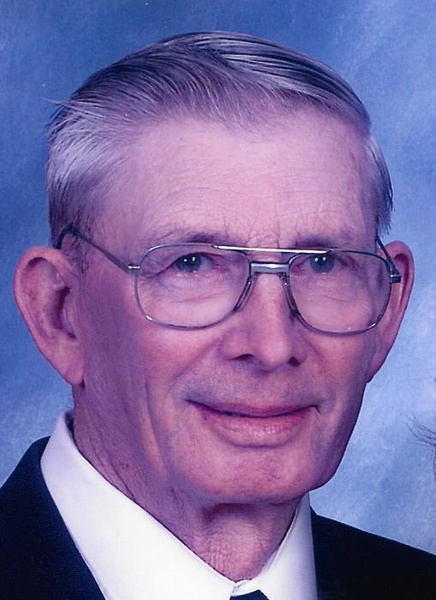 Richard L. Swanson, age 85, of rural Oneida, IL. died Friday November 17, 2017 at the home of his daughter, Rene.  Services are 2 pm Monday, November 20, 2017 at the Calvary Lutheran Church, New Windsor, IL.  Burial is in the Calvary Lutheran Cemetery where graveside military rites will be conducted.  Visitation is 4-7 pm Sunday at the Peterson Wallin Knox Funeral Home in Woodhull where masonic rites will be conducted at 7pm.  Memorials may be left to Bethany Lutheran Church or the Clover Public Library.  Online condolences can be made at www.petersonwallinknox.com.
Richard was born October 27, 1932 in Galesburg, IL. to Clifford and Marjorie Hughes Swanson.
He graduated from New Windsor High School and was drafted into the U.S. Army where he served in Korea from 1952 to 1955.    Richard was united in marriage to Janet V. Anderson January 9, 1955 in New Windsor.  She died in 2013.
He farmed all of his life in the Rio/Oneida area.  He was a member of the Henry County Farm Bureau and the Knox County Livestock Producers and was awarded the Outstanding Young Farmers Award early in his career.
His memberships include the Bethany Lutheran Church in Woodhull,  Rio Masonic Lodge #685 and the  American Legion George Norris Post # 484 in New Windsor.   He served on the AlWood School Board for many years,  and was a volunteer for the Rio Fire Department.
He loved to go fishing, bowling and spend time with his family, especially his grandchildren and great grandchildren
He is survived by one daughter; Rene (Gale) Bramlett of Rio, IL,  one son; Roger Swanson of Woodhull, IL,  10 grandchildren, several great grandchildren, 3 brothers; Russell (Nan) Swanson of Rio, IL, Rollin (Sherry) Swanson of Alpha, IL, and Rodney (Larro) Swanson of Rio IL.  Several nieces and nephews

He was preceded in death by his parents, wife,  one infant son: Dale Craig,  and one brother, Robert.

Click to download / open
To send flowers to the family in memory of Richard Swanson, please visit our flower store.