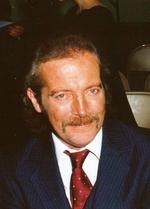 Reginald L. "Reggy" Randall age 60, of Milan, IL, formerly of Woodhull, IL, died Monday February 4, 2013 at Trinity in Rock Island, IL. Graveside services are 1:00 PM Thursday February 7, 2014 at the New Windsor (Petrie)Cemetery. There is no visitation. Memorials may be left to the family. Peterson Wallin Knox Funeral Home in Alpha is in charge of arrangements and online condolences can be made at www.petersonwallinknox.com

He was born September 12, 1952 in LaHarpe, IL to Marion and Bertha Johnson Randall. He attended AlWood Schools and married Nola Dykeman and later married Carol Burton.

He was employed at Gale Products and enjoyed repairing electronics.

He was preceded in death by his parents, 2 sisters Jodie Grover and Renee Little and a brother Randy.

To send flowers to the family in memory of Reginald Randall, please visit our flower store.