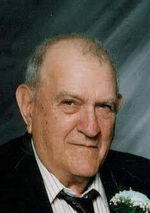 Robert "Keith" Armstrong, 92 of Viola, Illinois died Monday, March 28, 2016 at Aledo Health and Rehabilitation Center in Aledo. Services are 2:00 p.m. Sunday, April 3, 2016 at Fippinger Funeral Home in Aledo. Burial is in the Peniel Cemetery in rural Joy. Visitation is one hour prior to services at Fippinger's where memorials may be made to American Heart Association or the Alzheimer's Association. Online condolences can be made at www.fippingerfuneralhome.com.

He was born October 10, 1923 in Muscatine, Iowa to Frank and Dollie Young Armstrong. He attended the local schools. Keith married Helen Hays on January 19, 1943 in Aledo. She died December 9, 2012.

His parents, wife, one son, Robert, one grandson, 2 great grandchildren; two brothers and one sister preceded him in death.


John Deere
The insignias listed here may be subject to copyright and / or trademarked. Those copyrights and trademarks are owned by the respective organizations.

To send flowers to the family in memory of R. Armstrong, please visit our flower store.