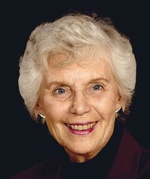 Phyllis A. Swearingen, age 83, of Aledo, Illinois died Friday, January, 23, 2015 at the Clarissa Cook Hospice in Bettendorf, Iowa. Cremation has been accorded and funeral services are 12:00 p.m., Thursday, January 29, 2015 at the College Avenue Presbyterian Church in Aledo. Private burial will be at a later date. Visitation will be at 11:00 a.m. at the church until the time of service. Memorials may be left to the Mercer County Animal Shelter, College Avenue Presbyterian Church or Bethany Children's Home. Fippinger Funeral Home in Aledo is in charge of arrangements and online condolences can be made at www.fippingerfuneralhome.com.

She was born August 30, 1931 in Rock Island, IL. To Herman and Evelyn Broksieck Wiklund. She graduated from Rock Island High School. On September 23, 1955, she was united in marriage to Vernon K. Swearingen in Rock Island.

Phyllis was a homemaker and worked as a secretary for International Harvester, Ford and Maynard Agency in Aledo and the Messiah Lutheran Church. Her memberships include the College Avenue Presbyterian Church in Aledo where she was instrumental in the operation of Wednesdays Kids. Phyllis was a member of the Beta Sigma Phi Sorority and served as a Mercer Township Trustee and an election judge.

She enjoyed photography and loved being with her family and grandchildren.

Her parents and a granddaughter, Shawna preceded her in death.

To send flowers to the family in memory of Phyllis Swearingen, please visit our flower store.