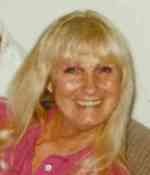 Paula "Dena" Arrington, 71, of Matherville, IL, died Tuesday, December 2, 2014 at Aledo Health Care Center. Graveside services are 1:30 p.m. Thursday, December 4, 2014 at Farlow Grove Cemetery in Matherville. Visitation is noon until 1 p.m. prior to services at Fippinger Funeral Home in Aledo where memorials may be left to the Mercer County Animal Shelter and online condolences can be made at www.fippingerfuneralhome.com.

She was born March 4, 1943 in Atlanta, Georgia. She graduated from high school and attended University of Southern California. Dena married Fredrick Arrington on July 21, 1983 in Las Vegas.

Dena was a homemaker and a professional seamstress. She was a member of the Boden Community Church and an avid animal lover. Dena enjoyed ceramics, having owned her own shop.

She was preceded in death by her parents and one stepdaughter, Myrna.

To send flowers to the family in memory of Paula Arrington, please visit our flower store.