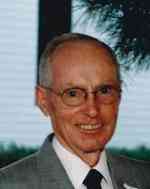 Paul was born at home in Seaton, IL on January 31, 1929 to Erwin and Elsie Jane (Kemp) Kernan. Paul graduated from Aledo High School in 1947.

He joined the Navy in January of 1948 and graduated from their Hospital Corpsmen School with a rank of P.O.3. He was honorably discharged in 1952. While serving, he met Josephine J. Beck of Everett, MA and they were married June 11, 1950 in Allston, MA, and they remained married until his passing. He graduated from the Moline Institute of Commerce with classes in accounting.

Paul worked in various jobs from butcher to bookkeeping until being elected as Clerk of the Court of Mercer County in 1964 where he was re-elected 8 times and served for 32 years. He also had a private business preparing taxes and was a trustee for several local farms.

He is the past President of the Illinois Association of Court Clerks, and he held offices in Young Republicans, J.C.s, and Exchange Club. He was a member of Oak View Country Club since 1955 and served on its board for many years. Over the years, he enjoyed bowling, golfing and playing cards.

He is preceded in death by his parents and siblings: Dorothy McKnight, Isabelle Dow, Charles, Carl, James and Kenneth.


Baptist Church
Baptist Church
Exhange Club
The insignias listed here may be subject to copyright and / or trademarked. Those copyrights and trademarks are owned by the respective organizations.

To send flowers to the family in memory of Paul Kernan Sr, please visit our flower store.