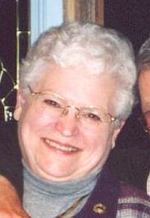 Patricia J. McCready, 78, of Aledo, formerly of New Windsor, IL, died, Thursday, August 29, 2013 at Select Specialty Hospital in Davenport, Iowa. Services are 11 a.m., Tuesday, September 3, 2013 at the New Windsor Presbyterian Church. Burial is in the Hopewell Cemetery, New Windsor. Visitation is 3-7 p.m. Monday at Peterson-Wallin-Knox Funeral Home in Alpha. A memorial fund will be established and online condolences can be made at www.petersonwallinknox.com.

She was employed at various restaurants and diners and became a cook at the New Windsor grade school and later at the Winola grade school, retiring as head cook in 1996.

She was preceded in death by her parents; husband: Richard; one son: Michael; three sisters and two brothers.


Presbyterian Church USA
The insignias listed here may be subject to copyright and / or trademarked. Those copyrights and trademarks are owned by the respective organizations.

To send flowers to the family in memory of Patricia McCready, please visit our flower store.