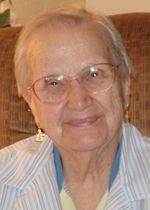 Olive E. Stallings, 90, of East Moline, Illinois formerly of Aledo, Illinois died Wednesday January 29, 2014 at Clarissa C. Cook Hospice House in Bettendorf, Iowa. Mass of Christian Burial is 10:00AM Monday February 3, 2014 at St. Catherine's Catholic Church in Aledo. Burial is in St. John's Cemetery Viola, IL. Visitation is from 2-5 PM Sunday at the Fippinger Funeral Home in Aledo where a Rosary will be recited at 5 PM. A memorial fund will be established and online condolences can be made at www.fippingerfuneralhome.com

During World War II she was employed at Farmall in Rock Island. She later worked for Miller Container in Milan, IL and most recently worked at Henderson Ford Co. in Aledo.

Olive was a homemaker. She was a member of St. Catherine's Catholic Church and the Altar and Rosary Society. Other memberships include the Red Hat Society, Mercer County Senior Citizens Center and the former Mercer County Hospital Auxiliary.

To send flowers to the family in memory of Olive Stallings, please visit our flower store.