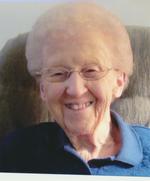 Norma J. Dahl age 90 of Aledo, IL, died Saturday May 30, 2015 at the Genesis Medical Center in Aledo. Services are 11:00 a.m. Tuesday June 2, 2015 at the Fippinger Funeral Home in Aledo. Burial is in the Aledo Cemetery. Visitation is from 10:00 AM until time of services Tuesday at Fippingers where memorials may be left to the New Boston Museum. Online condolences can be made at www.fippingerfuneralhome.com.

Norma was employed at Peerless Dairy and Conwall Studebaker in Rock Island before moving to St. Louis where she worked at Milner Chevrolet, St. Louis's largest Chevy dealer. In 1960 they returned to New Boston where she was employed as an accountant in the automotive and machinery business retiring and moving to Aledo in 1986.

She was a member of the Mercer County VFW Auxiliary, American Legion Fallerans Post 121 Auxilliary, Neighborhood Card Club and former member of the Oakview Country Club. She loved to sew and garden.

She is survived by several nieces and nephews.

Norma was preceded in death by her parents, husband and four brothers, LeRoy, Lysle, Donald "Dean" and Delbert Green.


American Legion Auxiliary
VFW Auxiliary
The insignias listed here may be subject to copyright and / or trademarked. Those copyrights and trademarks are owned by the respective organizations.

To send flowers to the family in memory of Norma Dahl, please visit our flower store.