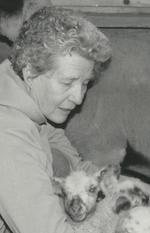 Nancy J. Bonynge, age 92 of Aledo, Illinois died Saturday August 1, 2015 at the Genesis Medical Center in Aledo. Funeral services are 11:30 AM Monday at the Fippinger Funeral Home in Aledo. Burial is in the Aledo Cemetery. Visitation is from 10:00 AM until time of services Monday at Fippingers where memorials may be left to the Mercer County Animal Shelter or the Mercer County YMCA. Online condolences can be made at www.fippingerfuneralhome.com.

She was born March 4, 1923 in Bloomington, IL to Harry and Pearl Ryburn Johnson. She graduated from Aledo High School and attended Bradley University in Peoria. On October 16, 1943, she was united in marriage to Thomas L. Bonynge in Alexandria, VA. He preceded her in death December 18, 2003.

Nancy was employed as a chemist at Alcoa and later was a lab technician at the Mercer County Hospital in Aledo. Nancy raised sheep on the family farm and assisted her husband in its daily operation.

She was a member of the College Avenue Presbyterian Church, D.A.R and the Mercer County VFW Post 1571 Auxiliary. She loved the outdoors and especially enjoyed her dogs, boating, swimming, sledding, skiing and canoeing.

Her parents, husband, 2 great great grandchildren and a sister preceded her in death.

To send flowers to the family in memory of Nancy Bonynge, please visit our flower store.