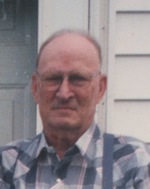 N. Leroy Deppe, 89, of Aledo, IL, formerly of Swedona, IL, died Thursday, June 26, 2014 at Genesis Senior Living in Aledo. Services are 11:00 AM Tuesday July 1, 2014 at Peterson-Wallin-Knox Funeral Home in Alpha, IL. Burial will be in the Alpha Cemetery where military services will be conducted. Visitation is from 5 - 7 PM Monday at the funeral home where a memorial fund will be established. On-line condolences may be made at www.petersonwallinknox.com.

He was an U.S. Army Veteran of WWII serving in the 407th Infantry, 102nd Division in Ansbach, Germany. He stayed in the service until October 1948.

His wife, a son, David, 3 brothers and 2 sisters, preceded him in death.


Army
Army
Bronze Star
Christian Cross
Combat Infantry Badge
Good Conduct Medal
The insignias listed here may be subject to copyright and / or trademarked. Those copyrights and trademarks are owned by the respective organizations.

To send flowers to the family in memory of N. Deppe, please visit our flower store.