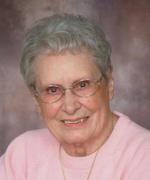 Myra L. Brown, 95 of Aledo, IL, died Friday, February 19, 2016 at Oak Lane Nursing and Rehab in Stronghurst, Illinois. Services are 2:30 p.m. Monday, February 22, 2016 at Fippinger Funeral Home in Aledo. Burial is in the Sugar Grove Cemetery, rural Aledo. Visitation is 1 p.m. until the time of services Monday at Fippinger's where memorials may be left to Hamlet/Perryton Presbyterian Church or the Oak Lane Nursing and Rehab. Online condolences can be made at www.fippingerfuneralhome.com.

She was born January 19, 1921 in Warren County, Illinois to David and Alta Ryner Smith. She graduated from Alexis High School and attended secretarial college in Davenport, Iowa. Myra married Fred L. Brown August 9, 1942 in Aledo, IL. He died in 1994.

Myra briefly taught school and was employed at the Aledo Montgomery Ward catalog store and later as a secretary in the probation office in the Mercer County courthouse.

She was a member of the Hamlet/Perryton Presbyterian Church where she served on various committees and enjoyed teaching children songs during bible school. She was also a member of the Sugar Grove Club.

Myra was preceded in death by her parents, husband, one brother and three sisters.

Presbyterian Church
The insignias listed here may be subject to copyright and / or trademarked. Those copyrights and trademarks are owned by the respective organizations.

To send flowers to the family in memory of Myra Brown, please visit our flower store.