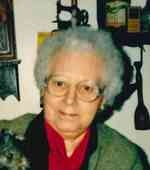 She was born June 16, 1909 in Middletown, IA to Zeno and Bertha Carter Keck. She graduated from New Windsor High School. She married Gilbert Henry Johnson August 5, 1933 in Elkport, IA. He died February 12, 2002.

Patty was employed at Modern Woodmen of America, retiring in 1973. She was a member of the New Windsor Presbyterian Church, its Golden Circle Society and Women's Association. Patty was also a member of the Order of the Eastern Star. She enjoyed knitting and crocheting.

She was preceded in death by her parents; husband; one son: Reid and a brother.


Order of the Eastern Star
Presbyterian Church USA
The insignias listed here may be subject to copyright and / or trademarked. Those copyrights and trademarks are owned by the respective organizations.

To send flowers to the family in memory of Mildred Johnson, please visit our flower store.