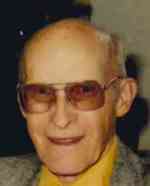 Merle L. Johnson age 92 of Aledo, IL. died Friday January 10, 2014 in his home. Funeral services are 10:00 AM Wednesday January 15, 2014 at the Trinity Presbyterian Church in Aledo. Burial is in the Aledo Cemetery. Visitation is from 4-7 PM Tuesday at the Fippinger Funeral Home in Aledo where memorials may be left to Gideon's International or Trinity Presbyterian Church. On-line condolences can be made at www.fippingerfuneralhome.com.

He was born August 5, 1921 in Duncan Township Mercer County, IL a son of Martin and Minnie Gustafson Johnson. He graduated from Aledo High School. On December 2, 1951 Merle and Bette A. Green were united in marriage in Seaton, IL.

Merle farmed southwest of Aledo all his life. He was Mercer Township Assessor for 8 years and was a self-employed Appraiser for many years.

He was a member of the Gideon's International, Trinity Presbyterian Church and former Director of the Mercer County Farm Bureau. He was a Pathway Hospice Volunteer for many years and was Chaplain for the Mercer County Jail.


His parents, an infant son Robert Merle, 2 brothers Donald and Rollin and a sister Arlene preceded him in death.


Farm Bureau
Presbyterian Church USA
The insignias listed here may be subject to copyright and / or trademarked. Those copyrights and trademarks are owned by the respective organizations.

To send flowers to the family in memory of Merle Johnson, please visit our flower store.