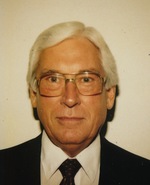 Melvin F. Williams, 89, of New Boston, Illinois, died Saturday, July 26, 2014 at Unity Point Health Methodist in Peoria. According to his wishes, his body was donated to science. Memorial Services will be 10:00 a.m., Saturday, August 9, 2014 at Fippinger Funeral Home in Aledo. There is no visitation. Burial will be at a later date in Corns Cemetery. Memorials may be made to Corns Cemetery and online condolences may be made at www.fippingerfuneralhome.com.

He was born January 13, 1925 in Perryton Township, outside of Aledo, Illinois to a family of 15, a son of Fred and Ruth Sproston Williams. He graduated from Reynolds High School in 1943. He never married.

Melvin served honorably as a radar man in WWII in the U.S. Navy. Melvin attended Monmouth College before settling on a career in sales with the JC Penney Co. He was employed first in the Aledo store, then Kewanee and finally retired from the Southpark Penney Store in Moline.

He was a member of the First Baptist Church of Aledo and the Aledo American Legion Post 121.

He deeply loved his family and friends, drinking beer at the cabin in New Boston, dancing, wintering in Arizona and chilling at the ranch in New Mexico. In his later years, he enjoyed watching the river traffic, the birds at his feeders at his home in New Boston and watching old reruns of Westerns on television. He enjoyed life to the fullest and shared that with everyone he knew.

He was preceded in death by his parents; 8 beloved sisters and two wonderful brothers.

He was truly loved and will be profoundly missed.


American Area Campaign Medal
American Legion
Asiatic-Pacific Campaign Ribbon
US Navy
Victory Medal
The insignias listed here may be subject to copyright and / or trademarked. Those copyrights and trademarks are owned by the respective organizations.

To send flowers to the family in memory of Melvin Williams, please visit our flower store.