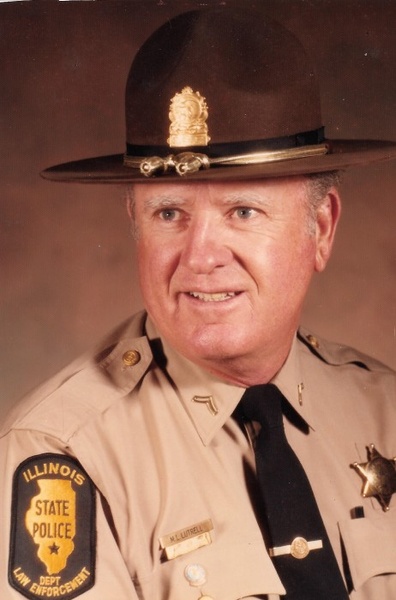 Max L. Lutrell, 93, of Alpha, IL, died Sunday January 29, 2017 at Aperion Health Care in Amboy, IL. Graveside services for Max and his wife, Darlene are 11:00 a.m., Monday, February 6, 2017 at New Windsor Cemetery where graveside military services will be conducted.  There is no visitation.  In lieu of flowers, memorials may be left to the Oxford American Legion Post 1197.  Online condolences can be made at www.petersonwallinknox.com.

He was born December 13, 1923 in New Windsor, IL to Clark and Grace McFarlin Lutrell.  He graduated from Alpha High School in 1941.  He enlisted in the U.S. Marine Corps in 1942 and served in the South Pacific.  He attended Villanova University in Philadelphia, PA prior to his separation from the Marine Corps.  He married Darlene M. Forseth September 25, 1948 in New Windsor, IL.  She died April 22, 2015.

Max was employed by John Deere in East Moline and  Rutledge Landscaping in Alpha, IL.  He was employed by the Illinois State Police District 7 for 27 years, retiring in 1982.  He was then employed by Alexander Lumber Company in Woodhull.

He was a member of the Oxford American Legion Post 1197 and the Mercer County VFW Post 1571.  He and Darlene moved to Arizona in 2006 and returned to Bettendorf in 2012.

Max was preceded in death by his parents; wife; one daughter: Gail Beth; 2 sons: Stewart and Monte; and two sisters.

To send flowers to the family in memory of Max Lutrell, please visit our flower store.