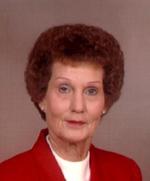 Mary M. Johnson, 79, of Woodhull, IL died Thursday, March 8, 2012 at Methodist Medical Center in Peoria. Mass of Christian Burial is Monday, March 12, 2012 at 11 a.m. at St. John's Catholic Church in Woodhull. Burial is in the St. John's Cemetery in Viola. Visitation is one hour prior to service at the church where a rosary will be at 9:15 a.m. In lieu of flowers, a memorial will be established. Peterson-Wallin-Knox Funeral Home is in charge of arrangements where online condolences can be made at www.petersonwallinknox.com.

She was born July 6, 1932 in New Boston, IL a daughter of Charles and Florence Bauguess Moseley. She graduated from Viola High School and married Robert L. Johnson December 6, 1952 in Viola, IL. He died August 21, 2011.

Mary was employed as a bookkeeper in the operation of the family business, Johnson Construction Company. She was a member of the Red Hat Society and enjoyed golfing and camping.

Her parents, husband, Robert, one daughter, LuAnne Molburg and two brothers preceded her in death.

Christian Cross
Christian Symbol
Red Hat Society
The insignias listed here may be subject to copyright and / or trademarked. Those copyrights and trademarks are owned by the respective organizations.

To send flowers to the family in memory of Mary Johnson, please visit our flower store.