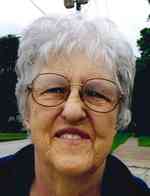 Mary K. Holton, 77, of Aledo, Illinois, formerly of Viola, died Monday, January 6, 2014 at Unity Point in Rock Island. Funeral Services are 11:30 a.m., Friday, January 10, 2014 at Fippinger Funeral Home in Aledo. Burial is in the National Cemetery, Arsenal Island. Visitation is 10 a.m. until time of services Friday at Fippinger's. Memorials may be left to American Diabetes Association and online condolences can be made at www.fippingerfuneralhome.com.

Mary was a homemaker, a nurse's aide at the Mercer County Nursing Home in Aledo for several years and a custodian at Sherrard High School for many years.

She was a member of American Legion Fallerans Post 121 Auxiliary in Aledo. She enjoyed bingo, traveling, auctions, gardening, camping, keeping busy and especially being with her family.

Her parents; husband and one sister: Nancy; one brother: William preceded her in death.

To send flowers to the family in memory of Mary Holton, please visit our flower store.