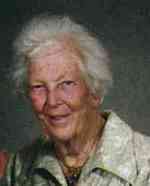 Martha L. Griswold, 88, of Aledo, Illinois, died Thursday, June 5, 2014 at Genesis Senior Living Center in Aledo. Services are 11:00 AM Tuesday, June 10, 2014 at Fippinger Funeral Home in Aledo. Burial is in the Aledo Cemetery. Visitation is from 4-6 PM Monday at Fippinger's where memorials may be left to the Aledo First Baptist Church. Online condolences can be made at www.fippingerfuneralhome.com.

Martha was a homemaker.

She was a member of the First Baptist Church, the Oakview Country Club, Hawthorne Ridge Golf Club and Kimmel Club. Martha enjoyed watching her granddaughter perform with the high school pom squad and attending her grandson's sports games.

Survivors include her son, Linus (Cathy) Griswold of Aledo; 2 grandchildren, Heather (Will) Cooper of East Peoria; and Matt Griswold of Champaign; one sister-in-law, Shirley Rhodes of Quincy; nieces and nephews.

Her parents, husband, one sister and one brother preceded her in death.

To send flowers to the family in memory of Martha Griswold, please visit our flower store.