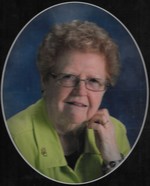 Marjorie A. Morland, age 83, of Eldridge,Ia. formerly of Alpha, Il died Monday, February 1, 2016 in her home. Mass of Christian burial is 11:00 a.m., Wednesday, February 3, 2016 at St. John's Catholic Church in Woodhull. Burial is in the Alpha Cemetery. Visitation is one hour prior to services at the church. Memorials may be left to St. John's Catholic Church or Meals on Wheels. Peterson-Wallin-Knox Funeral Home is in charge of arrangements and online condolences can be made at www.petersonwallinknox.com.

She was employed as a secretary for Elmer Fischer, AlWood's Superintendent of Schools. She was later employed as a clerk at Buban Sundry in Alpha until retiring in 1975. She was a member of St. John's Catholic Church in Woodhull, Altar Society and Red Hat Society. She was an avid bowler and loved ceramics and reading.

Her parents; husbands; one brother: Jim preceded her in death.


Red Hat Society
The insignias listed here may be subject to copyright and / or trademarked. Those copyrights and trademarks are owned by the respective organizations.

To send flowers to the family in memory of Marjorie Morland, please visit our flower store.