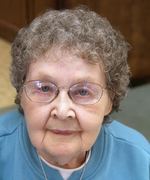 Marilyn E. Yerkey, 92, of Woodhull, Illinois died Wednesday, October 8, 2014 at Hope Creek Care Center in East Moline. Services are 10:00 a.m. Monday, October 13, 2014 at the United Church of Woodhull. Burial will be in the Woodhull Cemetery. Visitation will be 3-5 p.m. Sunday at the Peterson-Wallin-Knox Funeral Home in Woodhull. Memorials may be left to the Clover Public District Library or the United Church of Woodhull. Online condolences may be made at www.petersonwallinknox.com.

Marilyn was a secretary for 12 years at the Turner-Vermost Agency in Moline, IL, retiring in 1984. She was later a librarian at the Woodhull Public Library. She attended the United Church of Woodhull. She enjoyed reading, collecting miniature shoes and was an avid Cubs fan.

She was preceded in death by her parents, husband, one son, Mark Alan, one sister, Elaine Carlson, brother, Floyd Fay and a nephew Richard Gustafson.

To send flowers to the family in memory of Marilyn Yerkey, please visit our flower store.