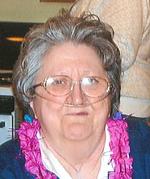 Margie M. Crow, age 68, of Aledo, IL died Thursday, January 5, 2012 at Trinity Medical Center in Rock Island. Graveside services are 11:30 a.m., Saturday, January 7, 2012 at Aledo Cemetery. Visitation is 10-11 a.m., Saturday at Fippinger Funeral Home in Aledo where a memorial fund will be established. Online condolences can be made at www.fippingerfuneralhome.com.

She was born February 27, 1943 in Aledo, IL to Everett and Betty Knox Downing. She attended Aledo Schools, obtained her GED and received her LPN at Blackhawk College. She married Jack Brasmer and later married Marion Crow in 1974. He died April 30, 1988.

She was preceded in death by her parents, husband, a grandchild, two brothers, Tom and Terry Downing.


Nursing
The insignias listed here may be subject to copyright and / or trademarked. Those copyrights and trademarks are owned by the respective organizations.

To send flowers to the family in memory of Margie Crow, please visit our flower store.