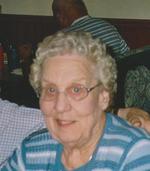 Marcella L. Malone, 94, of Aledo, IL, died Friday, April 24, 2015 at Brookstone in Aledo. Mass of Christian Burial is 10:30 a.m., Monday, April 27, 2015 at St. Catherine's Catholic Church in Aledo. Burial is in the St. John's Catholic Cemetery in Viola. Visitation is 4-6 p.m. Sunday at Fippinger Funeral Home in Aledo where a rosary will be recited at 6:00 p.m. Memorials may be made to St. Catherine's Catholic Church and online condolences can be made at www.fippingerfuneralhome.com.

Marcella was employed at JI Case in the clerical department for 27 years. She assisted her husband, Arthur in the operation of the family farm and later was a cashier for Lane Hyett Auction Company.

She was a member of St. Catherine's Catholic Church. Marcella was a very special caregiver for her family.

She was preceded in death by her parents; husbands, a sister, Mary M. Johnson and two brothers, Macy Lane and Charles "Bud" Moseley.

To send flowers to the family in memory of Marcella Malone, please visit our flower store.