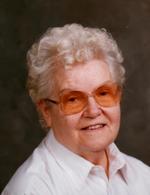 Madelyn I. Nickols, 81, a resident of Hillcrest Nursing Home in Geneseo, formerly of New Windsor, IL, died Sunday, August 18, 2013 at Hammond Henry Hospital in Geneseo. Visitation is 1 p.m. followed by a Funeral Service at 2 p.m., Wednesday, August 21, 2013 at Peterson-Wallin-Knox Funeral Home in Alpha. Burial is in the Monmouth Memorial Park Cemetery. Memorials may be left to the Hillcrest Nursing Home and online condolences can be made at www.petersonwallinknox.com.

Madelyn was born June 18, 1932 in Monmouth, Illinois to Jeff and Esther Kimmett Scott. She graduated from Monmouth High School. She married Donald Saben and later married Orve Nickols in 1973. He died in 1993.

She was employed at the Arsenal in Rock Island and Joliet for many years. Madelyn was also employed at Uptown Appliance. She owned and operated two restaurants in Davenport and Rock Island.

She was a member of the New Windsor Presbyterian Church and Mercer County Senior Center. She enjoyed riding her bicycle, walking, gardening and being outdoors. She was an avid Cubs fan.

She was preceded in death by her parents; her husband; one daughter: Lynn Ann; one son: Gary; one granddaughter: Jamie; and two sisters: Betty and Edith.


Presbyterian Church USA
The insignias listed here may be subject to copyright and / or trademarked. Those copyrights and trademarks are owned by the respective organizations.

To send flowers to the family in memory of Madelyn Nickols, please visit our flower store.