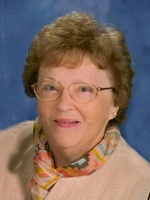 Mary "Jane" Streeter age 79 of Alpha, IL, died Thursday November 19, 2015 at Clarissa Cook Hospice in Bettendorf, Iowa. Cremation has been accorded and private burial will be at a later date. A Memorial Mass is 11:00 AM Monday November 23, 2015 at St. John's Catholic Church in Woodhull where a rosary will be recited at 10:00 AM There is no visitation. In lieu of flowers, memorials may be left to St. John's Catholic Church, AlWood Food Pantry, Tri-County Ambulance, Oxford Township Fire Department, Clover Library District or the AlWood Academic Foundation. Peterson Wallin Knox Funeral Home in Alpha is in charge of arrangements and online condolences can be made at www.petersonwallinknox.com.

Jane was a homemaker and enjoyed being with her family.

She was a fifth generation member of St. John's Catholic Church in Woodhull, having served on the building committee, lay council and as a CCD teacher for ten years. Jane served on the cemetery committee and was the assistant rural sexton.

She was preceded in death by her parents and one son, Robert.

To send flowers to the family in memory of M. Streeter, please visit our flower store.