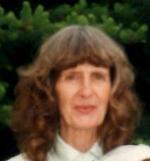 Louise and her husband together with Dick and Dorselle Anderson owned and operated Anderson Supermarket Inc. in New Windsor and Woodhull for many years retiring in 1985.

She was a member of the United Church of Woodhull and loved music, especially dancing and choreography. She enjoyed bowling at the Alpha lanes and water skiing. Later in life she took up snow skiing and was a wonderful active mother, grandmother and great grandmother to her family

To send flowers to the family in memory of M. Anderson, please visit our flower store.