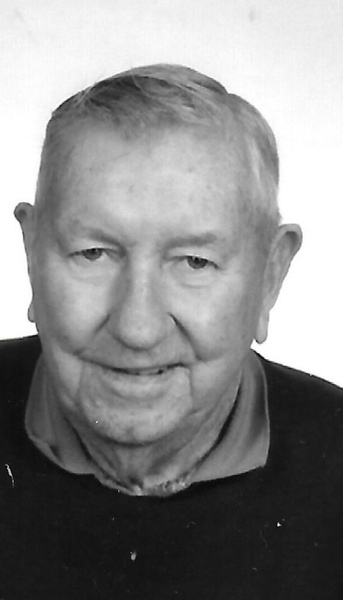 Lyle E. “Bus” Johnson, age 87, of New Windsor, IL, died Saturday June 16 at Seminary Manor in Galesburg, IL. Cremation has been accorded. A Memorial service will at 2:00 pm Sunday June 24, 2018 at Calvary Lutheran Church in New Windsor. Private burial will be in the Hopewell Cemetery rural New Windsor prior to the service. Friends may greet the family and celebrate his life following the service in the church basement. Memorials may be left to Hopewell Cemetery. Peterson Wallin Knox Funeral Home in Alpha, IL is in charge of services and online condolences can be made at www.petersonwallinknox.com
He was born February 1, 1931 in New Windsor the son of Albert and Elsie (Thompson) Johnson. After the death of his parents, he and his brothers were raised by their Uncle Ern and Aunt Lila Johnson. He graduated from New Windsor High School in 1949. On September 8, 1951 he married Marilyn A. Peterson in Aledo, IL.
Bus owned and operated Christy Plumbing and Electric with his wife and son, Mike, for 65 years.
He was very active in his community. His memberships include the Calvary Lutheran Church where he served on the Council, the New Windsor Fire Department, New Windsor Businessmen’s Association and the Boy Scouts of America. He served on the Board of Directors for the Village of New Windsor, the New Windsor Library, the New Windsor Telephone Co and the New Windsor Fair and Rodeo.
He was a lifelong St. Louis Cardinal Fan, enjoyed horse racing and visiting with people.
He is survived by his wife, Marilyn, 1 son Mike (Claudine) Johnson of New Windsor, 2 Daughters Malia (Derald) Winn of Rock Island, IL, Merigene (Jack) Cooper of New Windsor, 6 grandchildren: Jennifer (Brian) Holliday of Milan, IL, Amanda (Dr. Louie) Kantzavelos of Burlington, IA, Allyson (Bryan) Williamson of New Windsor, Josh Winn of Virginia Beach, VA, Chris (Jen) Winn of Moline, IL, Colby Johnson of Davis Junction, IL, 7 great grandchildren, Logan and Lindsay Holliday of Milan, IL, Christos, Michael and Zoey Kantzavelos of Burlington, IA, Skye and Lauryn Winn, of Virginia Beach, VA, 1 brother William (Marcia) Johnson of Aledo, IL and a sister in law Carol Johnson of Moline.
He was preceded in death by his parents, 1 son Mitch, brothers Carl and Dewey, and granddaughter in law Jennifer Winn.

To send flowers to the family in memory of Lyle Johnson, please visit our flower store.
Open