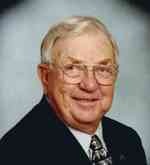 Louis W. Lloyd age 91 of Aledo, Illinois died Tuesday January 28, 2014 at Genesis Medical Center in Aledo. Funeral services are 10:30 AM Saturday February 1, 2014 at the Messiah Lutheran Church in Aledo. Burial is in the Aledo cemetery. Visitation is from 3 -7 PM Friday at the Fippinger Funeral Home in Aledo where Masonic Services will be conducted by the Buffalo Prairie Masonic Lodge # 679 at 7 PM. In lieu of flowers, memorials may be left to the Messiah Lutheran Church or the Mercer County FFA. Online condolences can be made at www.fippingerfuneralhome.com.

Louis was born November 29, 1922 in rural Reynolds, IL to Jasper and Ida Forsyth Lloyd. He attended the Marston school and graduated from Aledo High School in 1941.
He was a U.S. Army veteran serving in Japan from 1946 to 1947. On March 3, 1950 he was united in marriage to Eleanor P. Morris at the Messiah Lutheran Church in Aledo, Il.

Louis was a lifelong farmer. He farmed with his father in the Reynolds area and with the Morris family near Viola. He started farming east of Aledo in 1956 and continued farming with his sons until his passing.

His memberships include the Messiah Lutheran Church, Buffalo Prairie Masonic Lodge # 679 and the Mercer County Farm Bureau. He was a former school board member of the Community Unit School District # 201 and served as a former director of the Farm Credit Services.

He enjoyed gardening and attending his children and granchildren's activites.

His parents, 1 sister, Eva and 5 brothers, Marvin, John, Harold, Clair, and Donald preceded him in death.


Army
Evangelical Lutheran Church in America
Farm Bureau
Masonic Lodge
The insignias listed here may be subject to copyright and / or trademarked. Those copyrights and trademarks are owned by the respective organizations.

To send flowers to the family in memory of Louis Lloyd, please visit our flower store.