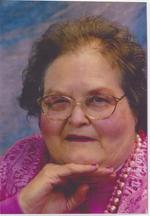 Lorraine E. Whitlow Martz, age 73, a resident of the Klein Center in West Burlington, IA, formerly of New Boston, IL, died Monday January 12, 2015 at the Klein Center. Services are 7:00 PM Monday January 19, 2015 at the Fippinger Funeral Home in Aledo. Private Burial will be at a later date. Visitation is from 5-7 PM Monday prior to services at Fippingers where a memorial fund will be established. Online condolences can be made at www.fippingerfuneralhome.com.
She was born April 13, 1941 in New Boston, IL to George and Beulah Banks Whitlow. She attended the New Boston schools. Lorraine married Walter L. Martz October 25, 1970 in Muscatine, IA. He died June 28, 2001.
She was employed at General Electric in Carroll, IA and after moving to Cainsville, MO, she worked at Jimmie Deans/Osceola Foods retiring in 2001.
Lorraine was a member of the Cainsville Asembly of God and she was a very artistic person especially using her hands for crafting, sewing and painting.
Survivors include 4 daughters, Lorri (Mark) Bliss of Wever, IA, , Kristi (Randall) Groff of Van Wert, IA, Lori Ann (Scott) Heinrich of Durant, IA, Brooke Argo of Charlotte, N.C, 1 son Bryan Martz of Pasadena, MD, 13 grandchildren, several great grandchildren, 2 sisters, Wanda (Kenneth) Whitmire of Joy, IL, Vonda Scull of Ft. Madison, IA, her uncle Jim Waite of New Boston, IL. and several nieces and nephews.
Her parents, husband and 2 bothers Stacey and Albert Whitlow preceded her in death.

To send flowers to the family in memory of Lorraine Martz, please visit our flower store.