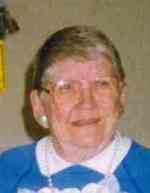 Lorraine E. Kalina, 94, of Lewiston, Montana, formerly of Aledo, Illinois, died Wednesday, January 8, 2014 at CMMC Skilled Nursing Home in Lewiston. Cremation has been accorded. Services are 2 p.m., Wednesday, January 22, 2014 at Fippinger Funeral Home in Aledo. Private burial is at the National Cemetery, Rock Island Arsenal. Memorials may be made to Messiah Lutheran Church and online condolences can be made at HYPERLINK "http://www.fippingerfuneralhome.com" www.fippingerfuneralhome.com.

She was born July 21, 1919 in Berwyn, IL to Charles and Anna Preib Lewis. She received her education from Parker High School and Brownell School in Chicago. She married George F. Kalina July 1953 in Chicago. He died in 1987.

Lorraine was a Nurses Aid at Mercer County Hospital in Aledo, retiring in 1983.

She was a member of the Mercer County VFW Post #1571 Auxiliary, the American Legion Fallerans Post #121 Auxiliary and the Aledo Messiah Lutheran Church.

She is survived by a daughter; Sally (Tivis) Napier of Morocco, IN and a son: Frank Everingham of Las Vegas, NV.

She was preceded in death by her parents, husband and 1 brother.

To send flowers to the family in memory of Lorraine Kalina, please visit our flower store.