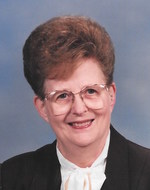 Loretta M. Gainey, 89, of Alpha, Illinois died Wednesday, July 22, 2015 at St. Anthony's Nursing and Rehab Center in Rock Island. Mass of Christian Burial is 10 a.m. Monday, July 27, 2015, at St. John's Catholic Church in Woodhull. Burial will be in the Alpha Cemetery. Visitation is one hour prior to services at the church where memorials may be left to ALS or St. John's Catholic Church. Peterson-Wallin-Knox Funeral Home in Alpha is in charge of arrangements and online condolences may be made at www.petersonwallinknox.com.

She was born October 27, 1925 in Phoenix Township, IL to Edward and Marie (DeQuacker) Taets. She graduated from Geneseo High School and attended Browns Business College in Moline. On August 17, 1946, she was united in marriage to Wilbur R. Gainey in Geneseo. He preceded her in death in 1976.

Loretta was employed as a bookkeeper for Dan-A-Way Bus Lines in Coal Valley and Lynn Implement Company in Lynn Center.

She was a member of the St. John's Catholic Church. Loretta enjoyed needlepoint and sewing.

Her parents, husband, son-in-law, Lonnie, one grandson, Lonnie Jr. and one brother, Fran preceded her in death.

Roman Catholic Church
The insignias listed here may be subject to copyright and / or trademarked. Those copyrights and trademarks are owned by the respective organizations.

To send flowers to the family in memory of Loretta Gainey, please visit our flower store.