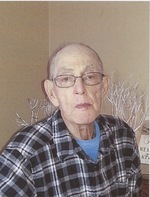 Loren A. Steines, 87, of Alpha, Illinois died Tuesday, May 6, 2014 at St. Mary's Medical Center in Galesburg. Visitation is 5-7 p.m. Friday, May 9, 2014 at the Peterson-Wallin-Knox Funeral Home in Alpha. Private graveside services will be Saturday in the Alpha Cemetery. In lieu of flowers, memorials may be made to Tri-County Ambulance or Oxford Township Fire Department. Online condolences can be made at www.petersonwallinknox.com.

He was employed as a diesel mechanic for many years. He worked at the I-80 Truck Stop in Walcott, Iowa, the Woodhull Plaza and Saelens Beverage in Rock Island, retiring in 1989.

He enjoyed camping, gardening, carpentry, being with his family. Loren always kept himself busy.

His parents, five brothers, two sisters and one great granddaughter preceded him in death.

To send flowers to the family in memory of Loren Steines, please visit our flower store.